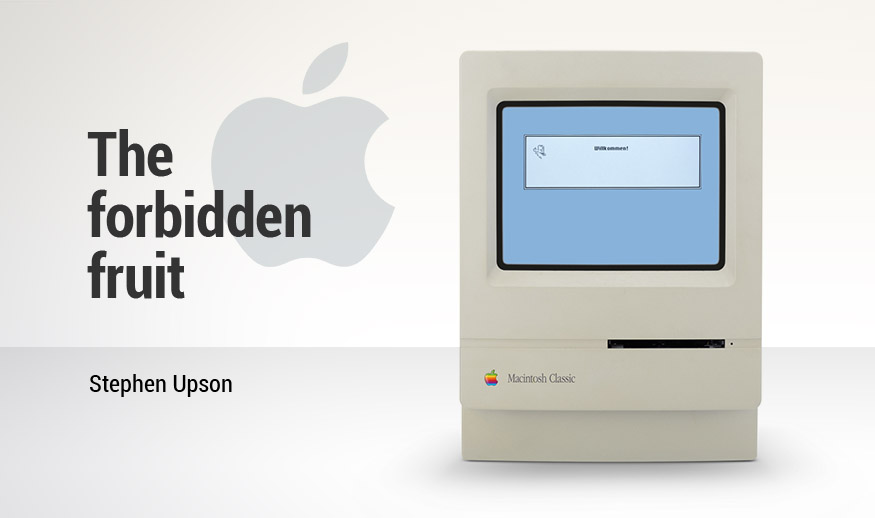 Arguably, Apple were the first? For most creative people of the time, it did indeed feel like the original sin!

In 1987, while at art college and busy mastering the skills of airbrushing and illustration, a break out session in the new technology centre of the building seemed like a welcome change from the week’s industrious activity. In a class of about 15, we were each plonked in front of a tiny beige box with an 8” inch black and white screen and told this was the future for the creative arts. After a good ten minutes of mockery and laughter, we picked our selves up off the floor and started poking keys and playing with the mouse. Beyond typing a letter in MacWrite or drawing some basic shapes in MacDraw, we wrote it off as completely useless! One year later, I completed my first commercial project on an Apple Macintosh – a knitting machine user guide created in the then ‘Adobe Illustrator 88’.

For the millennial generation and onwards, this story barely registers a flicker of interest and mostly concludes with the rolling of the eyes. However, for those of us that experienced first hand this migration to the digital age, the ordeal for the creative industry and the people working in it was very traumatic.

In the 1970s and early ’80s the industry was heavily unionised from designers, artworks and editors through to the print room floor. Every trade was highly skilled, eminently regarded and well paid. The BBC, Whopping and Fleet Street ruled the roost and wielded great power and influence. All was hunky-dory and nobody wanted to rock any boat. However, technology is an unstoppable force. A job that can be done quicker, more accurately and utilising lower levels of skill meant more profit and so, the first brick in the dam was removed.

In 1991 I got a job at a well established ‘Repro house’ on the south coast. For those less in the know, reprographics was the bit between the designers and printers in the print production process. Repro companies were made up of teams of scanner operators, camera operators and planners all of which were highly skilled and highly paid professions. In fact, one colleague at the time boasted that with all his over-time, we earned more that year than Margaret Thatcher, the then serving Prime Minister.

Well, I joined the company in none of these roles. Experimenting with Apple computers, two of us were drafted in to work on a new project, a system that basically did the same job as the planners only more accurately, more consistently and in a fraction of the time. The atmosphere was uncomfortable. We were outcasts, we were not invited to join the union and sat sheepishly on our own in a corner at the Christmas party. Within 6 months I had moved on and within 12 months the company was bust. Over 50% of the 60 strong workforce never worked in the industry again.

Over the following ten years, depending on what side of the fence you found yourself on, both great and terrible things happened for creative people. By 1994 we were producing digital video, experimenting with 3D animation and had designed and authored our first website. For designers it was a super exciting time with unimaginable creative opportunities and possibilites. Scanning technology greatly improved and shrank to desktop size and by 1995, a team of three of us could design, typeset and artwork a 28 page property news paper in under 12 hours. However, for those highly paid and well regarded scanner operators and planners, their decision was tougher. A five year apprenticeship plus many years plying their trade ended over-night. Either they join the digital band wagon or retrain – neither a great prospect especially for those over 50. For them, it was the demise of a great era!

I am an Apple man. Apple technology and their products have been part of my every day life for over 30 years. I bow down to Steve Jobs and the vision of one man in the mid 1980s when a then younger me scoffed and mocked his achievements. I have personally been a benefactor of said technology but I still hark back to a time when the smell of hot wax, developer and fix filled my nostrils and I spare a thought for those highly skilled people whose careers where lamentably cut short.